A Nuclear Option Against Climate Change

We believe that the launch of the world's only floating nuclear power plant (FNPP) “Akademik Lomonosov” is a breakthrough for sustainable development of the Arctic, remote areas and islands all over the world. Public trust and transparency is crucial for success. This website is a platform for honest and unbiased communication about the future of small nuclear and its role in powering human development and growth. 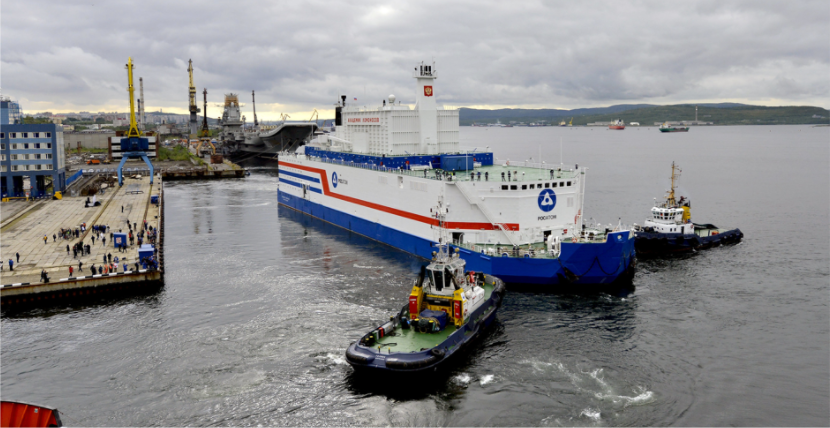 What is an FNPP and why do we need it?

FNPP stands for a floating nuclear power plant. It consists of a floating power unit (FPU) – based on Russian nuclear shipbuilding technologies, it is a special barge equipped with advanced safety and reliability parameters to the reactors on board – as well as coastal infrastructure implemented at the mooring site (breakwaters, power lines, etc.). The “Akademik Lomonosov” FNPP is the lead project in a series of low-power transportable power units.

What makes FPUs unique is that they are built, from start to finish, in shipyards, using the same expert construction technology as on nuclear icebreakers and Navy ships. Moreover, the floating design of the power plant lowers capital cost construction in the area where the nuclear power plant (NPP) is located.

Essentially, the FNPP is like a large nuclear-powered icebreaker (it is installed with the same type of reactors that have decades of safe operations on icebreakers). The only difference is that the power from the reactor isn’t used for safe passage through the Arctic sea but to power remote regions, where it is practically impossible to transport electricity mains to by land.

FNPPs can be used to provide power to islands, desalination facilities, and hard-to-reach coastal areas both in the North and the South.

But why is it necessary to install FNPPs – or nuclear power plants in general – in the Arctic?

Half of the 4 million people who live in the world’s Arctic regions are in Russia. Most of the settlements in the Far North are hard-to-reach; they are isolated “energy islands”, cut off from the national grid. Currently, their main source of fuel comes from coal and oil, which has an extremely negative impact on the environment. Air and water pollution harms valuable ecosystems, leading to a reduction in human life expectancy, as well as the extinction of entire species and living organisms.

Are there really no safer and cleaner energy supply options besides nuclear?

Those who oppose nuclear energy argue that it is possible for people in the Arctic, especially off the Siberian coast, to completely rely on renewable energy sources – replacing oil and coal with solar panels and wind farms. Their argument, however, is untenable.

In most of the inhabited territories along the Siberian Arctic coast, the average daily wind power is extremely low - the annual average speed does not exceed 3 to 3.5 metres per second (m/s) (or 6.7 to 7.8 mph). Power cannot be generated from wind turbines at wind speeds below 3 m/s. Moreover, permafrost makes installing wind turbines extremely difficult and expensive. High humidity and low temperatures cause wind turbine blades to be covered in ice. The experience of operating such wind farms in the Novaya Zemlya archipelago and the Yamal Peninsula, despite the high cost of installation and maintenance, has shown that the farms only operate at 15-20% capacity maximum and have to rely on backup energy sources – oil and coal – when wind intensity is low.

As for solar panels, they would only be operational for half of the year when the Arctic experiences what’s called the polar day (when the day lasts more than 24 hours). They also require constant maintenance – snow cleaning and de-icing. During polar night periods (when the night lasts more than 24 hours), and in times when the sun is obstructed by heavy snowfall, the lack of electricity generation from solar panels again must be compensated by burning coal and oil. On the other hand, small nuclear energy, namely floating nuclear power plants, can reach inaccessible Arctic areas and provide remote settlements and facilities with an uninterrupted source of clean energy. Therefore, reducing the region’s dependence on oil and coal, leading to a reduction of harmful pollutants, substances and millions of tonnes of greenhouse gas emissions.

A flexible, tailor-made small NPP solution based on a 3+ generation RITM SMR, designed to address a wide range of customer demands