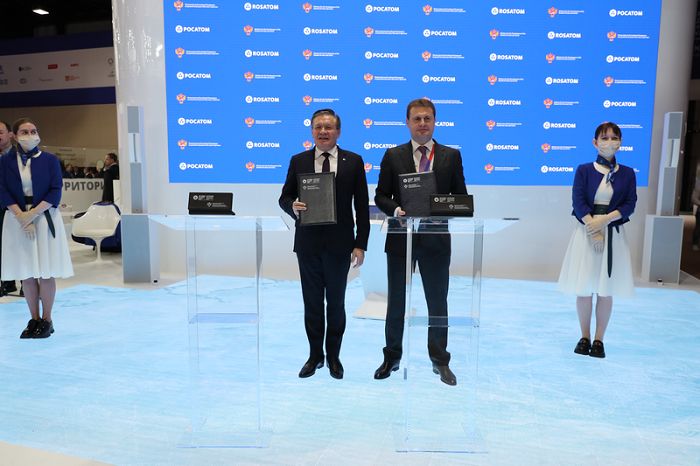 On June 16, on the sidelines of the XXV St. Petersburg International Economic Forum, the Russian Ministry of Economic Development and Rosatom signed a cooperation agreement.
The agreement was signed by the Russian Minister for the Development of the Far East and the Arctic Alexey Chekunkov and ROSATOM Director General Alexey Likhachev.
The parties agreed on the indicative terms of a concession agreement for the creation of a small nuclear power plant with a RITM-200N reactor in Yakutia and on a roadmap for joint activities necessary for the conclusion of the concession agreement on the project.
The construction of the power plant will be carried out within the framework of the Far Eastern Concession program. This program based on the use of a public-private partnership model was developed by the Ministry of Regional Development of Russia and is aimed at accelerating the creation of infrastructure for new enterprises and the social sphere.
"It is obvious that the Russian Arctic needs reliable and environmentally friendly energy sources. I am confident that our cooperation with the regional authorities and the Ministry for the Development of the Far East and the Arctic on the construction of a small nuclear power plant in the settlement of Ust-Kuyga in the near future will provide an opportunity for large-scale economic development of the Ust-Yansky district of the Republic of Sakha (Yakutia)," Alexey Likhachev said.
"Modern nuclear energy technologies provide sustainable solutions in the field of low-emission energy supply. Expanding the scope of application of such technologies will provide energy for major industrial projects, will improve the quality of life – especially in areas that are remote from regional centers, but just as important for the development of the region," Alexey Chekunkov said.
Within the framework of the WEF-2018, ROSATOM and the Government of the Republic of Sakha (Yakutia) signed an agreement on cooperation and partnership in the construction of small NPPs. In 2019, at the WEF, the parties signed a new agreement that more specifically defined the areas of cooperation. In 2021, a trilateral agreement was signed at the WEF (between the Ministry of Regional Development of Russia, Rosatom and the Republic of Sakha (Yakutia)) on cooperation in the development of, among other things, a complex of infrastructure necessary for the creation and full-fledged functioning of small NPPs. Regarding the small NPP construction project, a positive opinion of the state environmental review has already been received, engineering surveys have been completed, public hearings have been held, work is underway on registration of land plots for the construction of the plant and infrastructure, preparation of territorial planning and urban zoning documents.