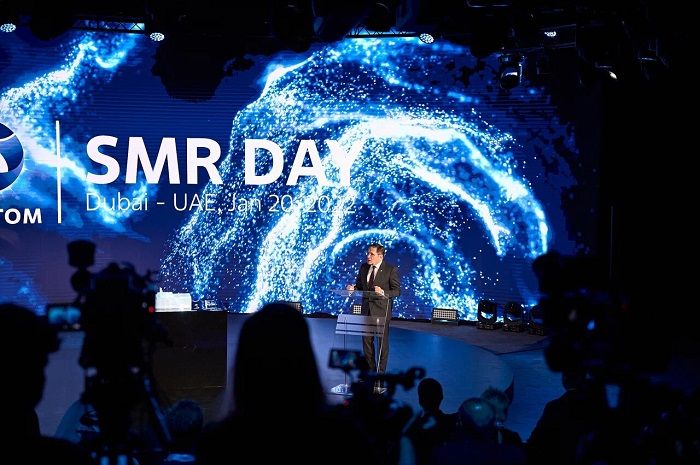 20 January 2022, Dubai, UAE – ROSATOM, a global technological leader, has hosted Small Modular Reactors Day, the key event of its ‘Breakthrough Technologies for a Sustainable Future’ programme at EXPO 2020, which is currently taking place in Dubai. The event was held with the participation of ROSATOM Director General Alexey Likhachev, World Nuclear Association head Sama Bilbao y Leon, and high-ranking representatives from international organisations, foreign governments and partner companies. UAE Atomic Energy Corporation Director General Mohamed Al-Hammadi and Russian Ambassador to the UAE Timur Zabirov attended the event.
Small Modular Reactors Day was an international platform for discussing the benefits of Small Modular Reactors, the prospects for their development and how this technology can be applied around the world. The program was opened by a multimedia show demonstrating the benefits of small modular reactor nuclear power plants in a wide range of climates while ensuring a stable supply of electricity and achieving decarbonization goals.
ROSATOM’s Director General Alexey Likhachev noted that the world is currently seeing favourable changes in how nuclear energy is perceived: “For me personally, last year’s UN Climate Change Conference in Glasgow was a watershed moment. I literally felt the winds of change. Not just at COP26 but at all energy and climate conferences in 2021 it was clear that people were realising that a carbon-free future is impossible without the peaceful use of nuclear technology. It is impossible to achieve a stable, low-carbon energy system based only on variable energy sources. The role that nuclear energy can play in helping the world move away from hydrocarbons and meet our collective climate goals is now firmly in the public consciousness.”
Answering questions during the panel discussion, ROSATOM’s Director General noted the advantages of SMR-based nuclear power plants. “The advantages of large-scale nuclear power plants are obvious – they provide access to a reliable, uninterrupted, low-carbon source of electricity in countries with high energy demand and well-developed infrastructure. Small modular reactors occupy a different niche. They supply power to remote regions, island states, countries with lower power needs or specific industrial projects, such as mining projects. There are other clear advantages of small modular reactor technologies, including their modularity – the ability to quickly scale power up and down to meet demand – quicker construction periods and lower start-up costs. Small modular reactors can provide energy and heat to areas where large-capacity nuclear power plants are either economically inaccessible or inappropriate due to geographic features or territorial restrictions, meaning they provide equal energy opportunities for people around the world. It seems to me that giving everyone access to low-carbon energy, especially in a world where almost a billion people still do not have such access, is a goal we must strive to achieve,” said Alexey Likhachev.
Kirill Komarov, ROSATOM’s First Deputy General Director, Director of Development and International Business, noted that Rosatom is not just offering conceptual technology, but is already successfully operating SMRs in Russia. “The floating power unit Akademik Lomonosov has been supplying the port city of Pevek in Russia’s Chukotka region with both electricity and heat for more than two years. We have also started developing our first land-based SMR nuclear power plant in Yakutia, which will be equipped with RITM-200N reactors and will be connected to the grid in 2028”.
Representatives of the governments and management of energy companies from Armenia, Kyrgyzstan and the Philippines spoke about how SMRs could solve a wide range of national development problems, and the head of PJSC Seligdar stressed that only SMRs were able to provide reliable energy supply at a predictable price for the company's projects in northern Russia.
Several agreements were signed during Small Modular Reactors Day. These included a Memorandum of Understanding on cooperation to construct SMR nuclear power plants, signed by ROSATOM and the Energy Ministry of the Kyrgyz Republic. JSC Rusatom Overseas signed a Cooperation Agreement with the Armenian nuclear power plant and a Memorandum of Intent with mining company PJSC Seligdar. Another important development was the virtual signing of a Joint Action Plan to elaborate nuclear power plants (NPP) using the Small Modular Reactor (SMR) technology through a Pre-Feasibility study.